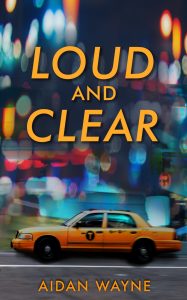 Jaxon pulled up to the front of the Flameshow Bar and looked around for his fare. It wasn’t all that late yet, when it came down to drinking, so it didn’t take a genius to spot the lone man in a nice suit walking toward his cab, wobbling just a little.

“Caleb Wrotslavsky? Did you call for a cab?” The man nodded, fumbling with a clip wallet, and then shoved an ID card under Jaxon’s nose. Jaxon picked out the C and the W, and that was good enough for him. “Okay,” he said. “Come on in.”

Caleb opened the door and slid behind him into the passenger’s seat. Jaxon glanced at the rear view mirror to check that he had buckled up–which was a relief, because he hated having to remind people. Then, before he could ask for the address of where to, Caleb handed him a card with the address and logo of the Lindsey Towers, a posh high-rise. Luckily, Jaxon was able to recognize it easy.

“Do you, uh, want this back?” he asked, holding out the card. Caleb nodded and took it, tucking it back into his pocket, before turning to look out the window.

Okay then, the guy was clearly a quiet drunk. Jaxon was perfectly fine with that. He clicked on his meter and headed off.

Caleb stayed quiet, and seemed perfectly happy to stay quiet throughout the whole drive, so Jaxon didn’t bother trying to chat. He was comfortable in silence, and it made for an easy job; just deliver, get paid, move on to the next job, when or if one came in. Admittedly, Tuesdays were usually pretty slow. Didn’t get a lot of calls for cab drivers on Tuesdays. Certainly not at bars. But whatever. To each his own. At least he had called for a cab, instead of trying to drive himself.

“Here we are,” he said, pulling up to the Towers. “Home sweet home?”

Caleb just nodded and handed over a credit card before Jaxon even told him the total. He rattled it off anyway and took the disgruntled-looking nod as permission to run the card.

“All righty.” He handed the card back, along with the receipts. “Just sign the top one and you can go on your way, okay?” Again a nod. Caleb scribbled something, and handed back the second receipt.

“Have a nice night,” Jaxon said, as Caleb moved to get out of the car. Another nod and a barely there hand wave, before the man made his way to the building.

“Okay, then,” Jaxon mumbled to himself, glancing at the second receipt. Numbers he had no trouble with, and it was nice to see that Caleb had left a decent tip. Jaxon stuffed the receipt in the right place, made his notes, and then clicked himself back on to awaiting new calls.

The next Tuesday night, Jaxon once again found himself being sent to answer a call for a pickup at the Flameshow Bar. And, once again, it was Caleb who was waiting outside when Jaxon pulled up.

Caleb held out his ID again, but Jaxon waved it off. “It’s cool. I remember you from last week.” Caleb was dressed up real nice again, from what Jaxon could make out in the dark. A classy-looking gray suit that fit him perfectly. Matched the type of bar he clearly frequented, and the high-rise he lived in. Jaxon threw a passing thought at what the guy did for a living and why he apparently felt the need to get drunk on a Tuesday, before he let it go. His wasn’t to reason why.

When Caleb had clambered in the back of the cab and settled in his seat, Jaxon looked over his shoulder. “Same place as last time? The Lindsey Towers?”

Caleb glanced up surprised, card half-pulled out of his jacket pocket. Then he nodded.

Jaxon grinned. “Cool. I’ll get you there easy.” At Caleb’s confused, slightly unfocused expression, Jaxon added, “I’ve got a good memory for this stuff. Part of the job.” He turned back around, eyes flickering toward the rear view mirror. Caleb had buckled up again, and was smiling slightly, but he didn’t seem inclined to say anything. No big deal. Jaxon clicked on his meter and pulled away from the bar.

The ride was, once again, completely silent. Jaxon listened to audiobooks as he was driving to jobs, but it wasn’t something he could do with a client in the car. A lot of cabbies listened to music, but Jaxon had stopped messing with the radio after his first couple of years, because there was no telling what would and wouldn’t offend someone. Now he drove in silence unless his passenger requested something. Caleb didn’t seem all that inclined when Jaxon glanced back again to check.

When they arrived at the Towers, Jaxon clicked off his meter and told Caleb the total like before. Also like before, Caleb handed over his card without a word, signed the receipt and tip, and handed it back with the pen. Goods for services, exchange complete.

“Have a good night,” Jaxon said, as Caleb climbed out of the car. Caleb paused, and then nodded to him, again with a short hand wave, before heading toward the doors.

As Jaxon drove over to the Flameshow Bar for the third time in as many Tuesdays to pick up one Caleb Wrotslavsky, he was seriously wondering if this was going to become a new regular routine or what. Jaxon had worked plenty of Tuesday nights, and he’d never seen this guy before. Had he just moved to the area? Was he a sudden fan of mid-week drinking? Why get dressed all nice to get drunk on a Tuesday?

There were several people waiting outside the bar this time, but Jaxon picked out Caleb easily. The tailored suit was a dead giveaway, even though his face was hard to see in the half dark of the bar’s lights.

“Caleb?” Jaxon called, as he slowed to a stop. The man immediately nodded and walked forward, forgoing showing his ID this time and heading straight for the car door to get inside. “How are you doing tonight?”

Caleb glanced up at him, then shrugged.

“Okay,” Jaxon said easily. If Caleb didn’t want to talk, the guy didn’t have to. “The Towers?” Caleb nodded. “Cool.”

Jaxon clicked the meter on, and away they went.

“You’re really not much of talker, huh?” Jaxon couldn’t help but ask at a stoplight, glancing over his shoulder. Caleb actually snorted, the first sound Jaxon had heard the guy emit. It was a little surprising to hear sound at all, and Jaxon had to bite his tongue on asking what was funny. Especially when Caleb only shook his head, lips quirking, before he went back to looking out the window.

Okay, then. Jaxon shrugged and turned back around, the light green again.

The rest of the trip was the becoming-usual silence. When they pulled up to the Towers, Caleb was ready with his card, handing it over before Jaxon gave the total.

“Impatient to get home, huh?” Jaxon said, swiping it and giving Caleb the receipt to sign.

Caleb shrugged a shoulder and ducked his head to sign his receipt. Jaxon watched him pause, then put pen to paper to scribble something below his signature before he gave Jaxon a half-smile and handed back the pen and paper.

“Have a nice night,” Jaxon said as Caleb got out of the cab. Caleb nodded again and waved, his hand floating by his mouth for a second before he smiled again and turned, heading toward the entrance. He had a nice mouth, from what Jaxon could see in the Tower’s night lights. Even nicer when he smiled.

Jaxon shook his head, turning his attention back down to the receipt in his hand. The same tip, a nice one, and… yep. Something else scribbled at the bottom.

He turned on the light in his car and squinted, already feeling anxious about it. Those were letters, all right. Probably there was even a sentence. Caleb had definitely written something on the receipt.

Jaxon’s trepidation over trying to struggle through figuring out what Caleb’s note said warred with curiosity. Curiosity won, so Jaxon bent over the words, trying to sound them out. Caleb’s handwriting wasn’t messy or anything, but Jaxon had trouble with letters even if they were typed. Most handwriting tended to make things harder.

Not much of a talker at all.

Jaxon stared down at the paper and read it again, just in case. He got the same thing the second time around, which usually meant he’d read the thing correctly. So he was probably right, but he took a picture of it with his phone and sent it to his sister anyway, to get a second opinion. Tatyana didn’t have trouble reading—she wasn’t stupid. She was also probably asleep right now, what with the time difference, but maybe she’d get back to him later.

Still, if he was right, what did the note even mean? Besides that, yeah… Caleb wasn’t much of a talker. Clearly.

Well. Whatever. Jaxon wasn’t going to worry about it. He tucked the receipt away, stashed his phone again, and let dispatch know he was available.

Tatyana called him on Wednesday, at way too early in the morning.

“Sorry,” she said, “I’ve got a morning class and wanted to answer you before I left. Didn’t think about the two hours.”

“Jaxon,” she said, and he could hear her rolling her eyes, the brat. “The note? Did you wanna know what it said?”

“Oh,” he said, remembering that easily. “Yeah. Uh. Not much of a talker at all?”

“Yeah,” she said. “And a little tongue-sticky-out face.”

“Dunno. A client. Doesn’t say much. I said something about it, this is what I got.”

“Love you too,” Jaxon said before she hung up. He fumbled with his phone and pulled up the picture he’d taken of the receipt. He hadn’t noticed before, too hung up on trying to read the damn thing, but yeah. There was a little smiley face at the bottom. With a tongue sticking out. Huh.

Jaxon shrugged, shoved his phone under his pillow, and rolled over, trying to fall back asleep for another couple of hours. He’d think about it later.